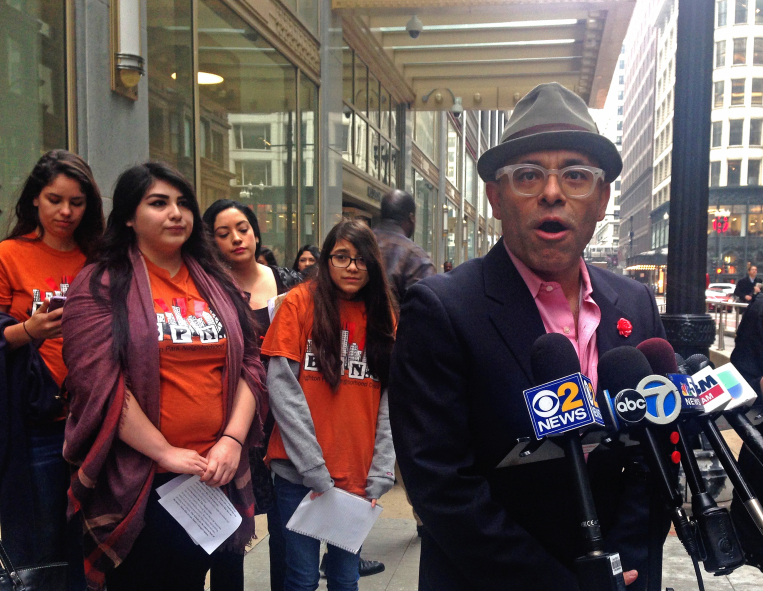 Chicago Public Schools’ finance chief Ronald DeNard attempted to mitigate the damage by announcing a new budget appeals process, but he didn’t provide any details about it.

Sixteen of the 18 Latino community members tasked with advising CPS resigned in protest on Wednesday, citing a Chicago Sun-Times story from Tuesday that found that schools with 50 percent or more Hispanic students were cut at twice the rate of those with the same percentages of white students.

CPS recently made $46 million in cuts to school budgets by “freezing” half the discretionary money each school had left from district, state and federal sources. None of the cuts was larger than 5 percent of the budget schools started with last fall, but the cuts affected each school differently, depending on how principals spent money this year.

On average, Hispanic schools lost 1.8 percent, African-American schools 1.6 percent and white schools 0.8 percent. And schools where three out of four students qualify for a free or reduced-price lunch were cut at twice the rate as schools with only one in four poor students, the Sun-Times analysis found.
Spokeswoman Emily Bittner couldn’t say how much money could be in play for any appeals process or how it would work.

The new budget — CPS’ third version this year — accounted for $104 million in cuts, including the spending freezes, the cancellation of some teacher training and four unpaid furlough days imposed on all staff.
Even with a $111 million hole that CPS hopes the state will fill this spring, the budget passed 5-1 with vice president Jaime Guzman casting what’s believed to be his first no vote since taking office in January 2016. He could not be reached for comment.

In another unusual development, former Board of Education vice president Jesse Ruiz railed against the cuts to school board members, even as he praised the district for recently suing the state for a bigger share of funding.
“I was saddened that CPS lost the moral high ground in decrying a state funding system that has a disparate impact on poor and minority children, when its own ‘method of administration,’ its budget cuts, have a disparate impact on its predominantly Hispanic schools,” said Ruiz, whom the mayor put in charge of the Park District board after CPS. “What adds insult to injury is that CPS has a Latino Advisory Council, which it hasn’t engaged or consulted with on these budget cuts.

“During trying times, it’s especially important for CPS to reach out to its constituencies,” he continued, “and Hispanics are CPS’ largest.” Students of Hispanic descent account for 46.5 percent of all students, compared with about 37.7 percent African-American and 9.9 percent white.

School board president Frank Clark insisted that the unfairness was “an unintended consequence.”
Officials also said that low-income schools had started out with more money, and that all cuts resulted from terrible choices left to them by Gov. Bruce Rauner. CPS sued Rauner and state officials last week, accusing them of funding two separate but unequal school systems, one for Chicago, whose students are mostly African-American and Hispanic; the other for the rest of the mostly white state.

“The governor backed us into a corner, and there was no good solution,” CEO Forrest Claypool said, describing the choice to unfairly impact poor schools serving Hispanic and black children more than those with a majority of white students. “Good teachers would have been lost across the city in all neighborhoods” at up to 100 schools. “Laying off teachers midyear is exceptionally disruptive to students, which is what an across the board reduction would have done.”

Rauner vetoed a bill in December that contained $215 million CPS was counting on for teacher pensions, with the governor saying the conditions for that money hadn’t been met.

On Wednesday, the governor’s office issued a statement saying the cuts were the result of incompetent administrators in Chicago.

“The Rauner administration strongly condemns cuts implemented by the Chicago Public School district, which were caused by decades of fiscal mismanagement, and disproportionately affected low-income students,” Eleni Demertzis, a spokesperson for Rauner, said in an emailed statement.

“Under the framework developed by Governor Rauner’s bipartisan School Funding Reform Commission, all public schools in Illinois would receive equitable funding, and the city of Chicago’s inequitable funding of poorer schools would come to an end.”

At a protest before the meeting, Ald. Gilbert Villegas (36th) called it a “slap in the face” to have the cuts hit Hispanic students harder.

Villegas highlighted the importance of the LAC, a group of community leaders created by former schools chief Barbara Byrd-Bennett to provide CPS with crucial feedback.

“The LAC was formed over two years ago because there wasn’t enough Latino leadership at the board level and at the district level,” Villegas said. “When Jesse Ruiz left the board, the role of the [LAC] was to be able to provide feedback to the district leadership about Latino issues [and] provide recommendations on how to improve student achievement and retention of teachers and administrators, and to be able to work with the CPS.”

During her time at Brighton Park Elementary School, Jennifer Nava, now a Kelly High School freshman, witnessed how her “second home fell apart” because of CPS budget cuts. Now she fears Kelly High School will fall apart too.
Nava, who couldn’t hold back her tears during the press conference, said the budget cuts forced her former school to close its library and cut its music program. Nava recounted how she had to say goodbye to her eighth-grade teacher, who was laid off when funds were slashed. The teacher, whom she saw as a father figure, also had a baby on the way.

By Lauren Fitzpatrick and Andrea Salcedo